On the Margin of History 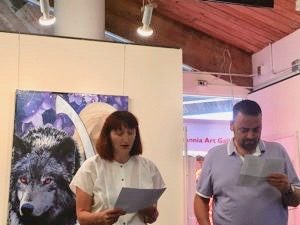 The collaboration with a poet, Mohamad Kebbewar, started as “Poetic pairings,” an event organized by Pandora’s Collective, an outreach non-profit organization, dedicated to promoting literary arts in Vancouver, Canada. We were excited to read together since our countries, Serbia and Syria, experienced similar fates. When we began weaving our verses together, we realized how war made us both feel the same, helpless, frightened, and lost. Our lines overlapped, our words chased each other on the paper. Even our voices echoed with the same emptiness. Mohamad and I recognized how a human soul can be peeled, layer by layer, and revealed through art. We got a lot of feedback from our audience about our work together. Thanks to the generous offer of Pamela Bentley’s time, space and editing skills, we made a good audio recording of our poem at the Co-op Radio studio.

The need to go further and investigate how art enables better understanding of narrative strategies, and the functioning of intuition led us to the idea of a visual poem, and Augmented Reality installation that would challenge new paradigms of feeling and communication. We connected with an artist and writer, Mary McDonald, whose interests are in posing poetry narrative against and within layers of sound, silence, image, and video.

“Margin of history” is a witness of the destruction of ancient history and the sharp demographic change in Aleppo, a city of six million people that lost ninety percent of its residents over the course of six years, and then filled with new people. It is the witness of the breakdown of former Yugoslavia, culminating in the NATO bombing of Serbia where silence was the only response to events that had left people in shock and disbelief. It is a transdisciplinary project that considers the tensions between personal voice and story and the possibilities of the digital visual to suggest and reinforce false and real narratives and/or to create understandings through metaphor, playing with all levels of our perception. It attempts to reframe our consciousness to find empathy and closeness, humanity in chaos.

Mobile electronic technology is used to employ symbolic storytelling in order to tell the true cost of war — the reverberating loss of the destruction of people and place, family, heritage, traditions, and cultures. Utilizing stone and clay, the oldest forms for written record as image and metaphor, through direct photo and video manipulation layers have been created from still images, clips of slow motion, time lapse, hyper lapse, stop motion, gifs, lines of light, double exposure, long exposure, motion graphics, and text. Fragmented layers of sound and image reproduce a sense of displacement and erasure. Photographs, video, text, music are manipulated by hand — distorted, skewed, glitched, inverted, repeated, placed in juxtaposition and superimposition. The AR exhibit consists of a mosaic of stills which when viewed with the AR app on a smartphone become short videos. These brief fragments of poem and film enhance the experience of the surreal and feelings of displacement. Text is digitally exploded, creating reverberating echoes of lost words, lost truths. Writing and artistic creation is a kind of healing, processing, and letting go of war and decomposition of life. Even when we chose to leave them behind, they never leave us.

On the Margin of History from connect on Vimeo.

Our collaborative work has been presented in Europe in summer 2019, and in Canada. There are also other events and opportunities coming.

Our video is screencast at the movie festivals.

F is for French Events, Readings, Workshops, Exhibitions and Installations 2019